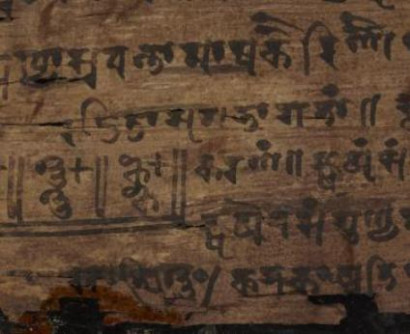 The earliest ever use of the zero symbol dating back to the third century was found on an ancient Indian text that has been housed in a library in Britain for more than 100 years, scientists said. Researchers made the discovery after inspecting the scroll – known as the Bakhshali manuscript – which they say was a document used by merchants to do their sums when trading. A team of experts in the University of Oxford applied a radiocarbon technique to three samples of the fragmentary text, with the earliest dated in the period of 224 to 383 AD.
The manuscript was discovered by a farmer buried in a field in 1881 in the village of Bakhshali, Peshawar. The find in ancient India was made in the area now a part of Pakistan. It was later acquired by the Bodleian Library in Oxford, where it has been housed since 1902.
The zero found in the Bakhshali manuscript did not feature it in the stand-alone way we know it today, but rather it was used as part of a set of numbers such as “101”.