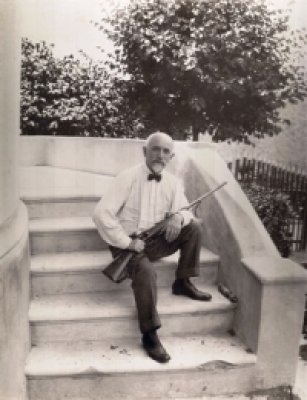 Michael Aramyants who was an Armenian entrepreneur, oil producer, famous benefactor and public figure, was born in 1843 in Artsakh but he lived and worked in Tbilisi. He contributed a great deal to the reconstruction and prosperity of the town. Michael Aramyants the world famous entrepreneur and national philanthropist had provided substantial assistance to his native people in solving numerous cultural, political, social and other issues.

In Akhtala you can find the only valuable heritage from Aramyants: a castle with 32 ha area constructed in Swiss style. The story of the castle is the following: travelling by Switzerland he sees a charming castle and he likes it so much that returning to Tbilisi he sends the prominent architect Bzoghli to Switzerland to see the castle and draw preliminary design of a similar castle which he soon builds in Akhtala. It is important also to note that the first tennis court of Armenia was found in the castle of Aramyants. Aramyants had different meetings and discussions with many prominent people of that time such as Khrimyan Hayrik, Hovhannes Tumanyan, Alexandr Shirvanzade and others.