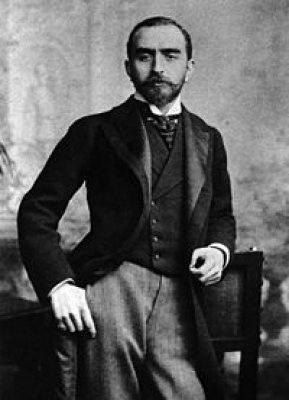 An Armenian businessman and philanthropist. He played a major role in making the petroleum reserves of the Middle East available to Western development. By the end of his life he had become one of the world's wealthiest individuals and his art acquisitions considered one of the greatest private collections

Calouste Gulbenkian (23 March 1869 - 20 July 1955) was born in Üsküdar, in Constantinople, the son of an Armenian oil importer/exporter. His father sent him to be educated at King's College London, where he studied petroleum engineering, and then to examine the Russian oil industry. In 1896 Gulbenkian fled the Ottoman Empire along with his family, as a result of the Hamidian massacres. They ended up in Egypt, where Gulbenkian met Alexander Mantashev, a prominent Armenian oil magnate and philanthropist. These new acquaintances included Sir Evelyn Baring. Still in his twenties, Gulbenkian moved to London where he arranged deals in the oil business. He became a naturalized British citizen in 1902. In 1907, he helped arrange the merger of Royal Dutch Petroleum Company with "Shell" Transport and Trading Company Ltd. Gulbenkian emerged as a major shareholder of the newly formed company. His habit of retaining five percent of the shares of the oil companies he developed earned him the nickname "Mr. Five Percent".

Gulbenkian amassed a huge fortune and an art collection which he kept in a private museum at his Paris house. His four-story, three-basement house on Avenue d'Iéna was said to be crammed with art, a situation ameliorated in 1936 when he lent thirty paintings to the National Gallery, London and his Egyptian sculpture to the British Museum.

He left France in late 1942 for Lisbon and lived there until his death, in a suite at the luxurious Aviz Hotel, on 20 July 1955, aged 86. His Armenian wife died in 1952. They had two children, a son Nubar and a daughter Rita, who would become the wife of Iranian diplomat Kevork Loris Essayan.

He is buried at St. Sarkis Armenian Church, London. Gulbenkian was a sponsor of the church, to provide “spiritual comfort” to the Armenian community and a place of gathering for “dispersed Armenians,” according to a message written by Gulbenkian to the Catholicos of All Armenians.

At the time of his death in 1955, Gulbenkian's fortune was estimated at between US$280 million and US$840 million. After undisclosed sums willed in trust to his descendants, the remainder of his fortune and art collection were willed to the Calouste Gulbenkian Foundation (Fundação Calouste Gulbenkian), with US$300,000–$400,000 to be reserved to restore the Etchmiadzin Cathedral in Echmiadzin, Armenia, when relations with the Soviet Union permitted. The Foundation was to act for charitable, educational, artistic, and scientific purposes, and the named trustees were his long-time friend Baron Radcliffe of Werneth, Lisbon attorney José de Azeredo Perdigão, and his son-in-law Kevork Loris Essayan. The Foundation established its headquarters and the Calouste Gulbenkian Museum (Museu Calouste Gulbenkian) in Lisbon to display his art collection.