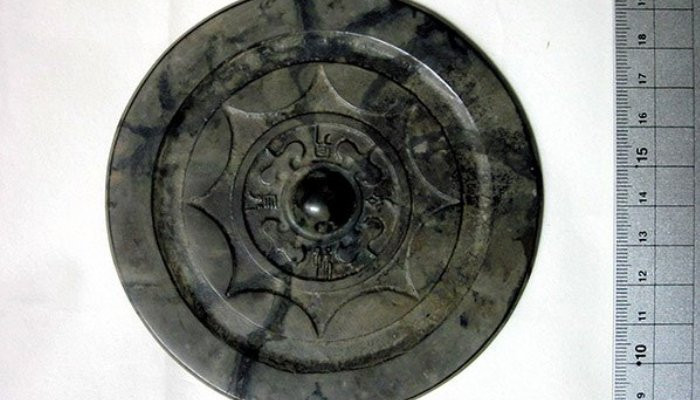 FUKUOKA--A remarkably preserved 1,900-year-old bronze mirror made in China around the early second century was unearthed whole at an archaeological site here, city authorities said.
The buried cultural properties division of the Fukuoka city government said Dec. 5 that the mirror from the late Yayoi Pottery Culture period (300 B.C.-A.D. 300) was excavated from the Nakashima archaeological site in the city’s Hakata Ward.
The bronze mirror, manufactured in China during the Later Han Dynasty (A.D. 25-220), carries patterns that classify it as a “linked-arc mirror.” It measures 11.3 centimeters across, and its surface is inscribed with text that reads, “chang yi zisun,” which means, “to benefit future generations forever.”
The mirror was unearthed in April, together with earthenware from sometime around the middle of the late Yayoi period, from a depth of some 2 meters beneath a former village site.
While most ancient mirrors datable to similar periods are typically found broken and covered with patina, this specific one was found whole, unpatinated, and in such good condition that it still reflects the viewer’s face, albeit vaguely. It is believed a humid environment prevented it from oxidation.